Eric Hicks Oct 09, 2016
3 Comments
44,741 Views
Build, How to Build Yourself
Eric Hicks
Unfortunately, we have seen a lot of Chinese copies (imitation is the greatest form of flattery) but I have not found one yet that compares to the build quality of the Stealth. Now, Stealth has introduced a new frame line-up as an answer to the DIY market who until now were forced to buy imitators since Stealth did not offer frame kits.

For over 8 years now, Stealth Electric Bikes have earned a global reputation for building tough and reliable turn-key electric bikes. Stealth’s are great for the kind of guy with a big wallet and very little technical knowledge, but there’s a huge portion of the ebike community who would like to customize their own weapon using their own components.  Stealth has known this for quite some time, and have answered the call with their new spin off brand, FUTR Electric Bikes.

Recently I asked JK (CEO of Stealth) what brought about this new side project. This was his reply.

“Whoever thinks that the ebike community is going to be satisfied with 250W, 500W or even 1000W ebike laws is dreaming. As long as the sun keeps rising, there’s going to be guys out there who will push the limits until they inadvertently find out what those limits are. By the same token we would like to help raise the standard of DIY ebikes across the world and see those limits pushed further. I want to see how nutso these guys can get.”

Derived from Stealth’s catch phrase (Fly Under The Radar), FUTR frames have so far released two types of kits, and the factory are already playing trying to play catch up with the flood of orders.

So what’s the difference between a turn-key Stealth and a FUTR frame? Stealth Electric Bikes are built from a wide range of custom and proprietary components which make them hard for the average enthusiast to take and personalize.  FUTR on the other hand is designed with DIYers at the top of the design tree. From the head tube to the dropouts, FUTR frames are compatible with a huge variety of off the shelf forks, cranks, brakes, wheels and batteries.

Currently, there are two models to choose from. The FUTR Alpha and the FUTR Beta, each of which come in a choice of either gun-metal grey or snow white. All the frames are hand built at the Stealth facility in Melbourne (in south east Australia) and come with a 12-month warranty against defective workmanship. 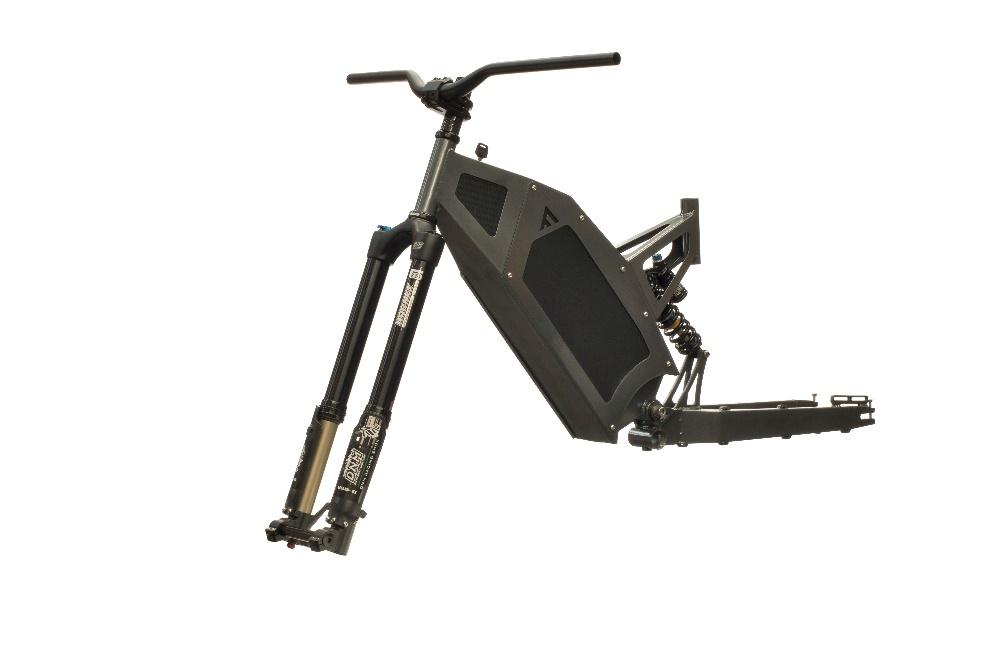 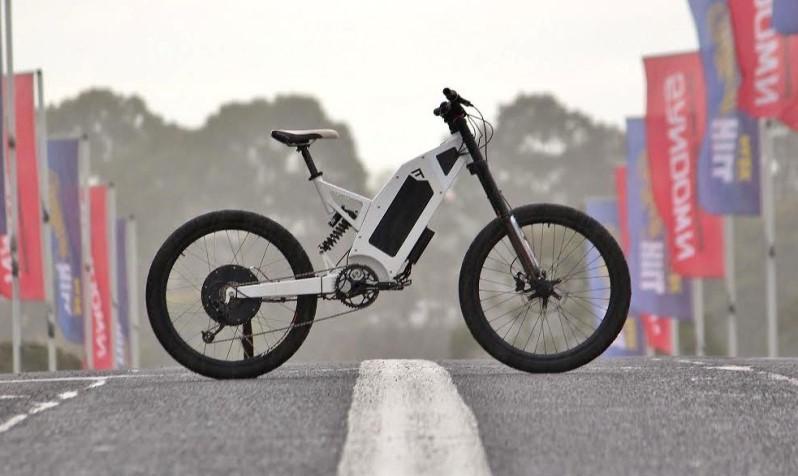 The FUTR Alpha is inspired by the original Stealth Bomber which is considered by most as the Mac Daddy of ebikes. The heavy duty monocoque chassis has a large battery compartment (330 X 118 X 163mm), can fit 27.5” tyres, adjustable shock mount, 53T chain ring capability, carbon look inserts and horizontal pinching dropouts with an integrated derailleur hanger.  It’s better suited to taller guys who don’t mind throwing a bit of weight around, the Alpha can carry more than enough batteries for a long range commuter or a 10kW tyre shredder.  We have seen a few builders now managing to stuff 2600 Watt hours of battery into the cavernous battery compartment. Perfect for those looking for some extra range, even when pushing hard.

Although a single crown fork can be used, this frame best suits a dual crown setup with the DNM USD-8 being a popular choice with many builders.  Another advantage of this bike is the ultra-robust rear swing arm. Beefy enough to handle a 19” moto rim and tire for some serious puncture-resistance and traction. 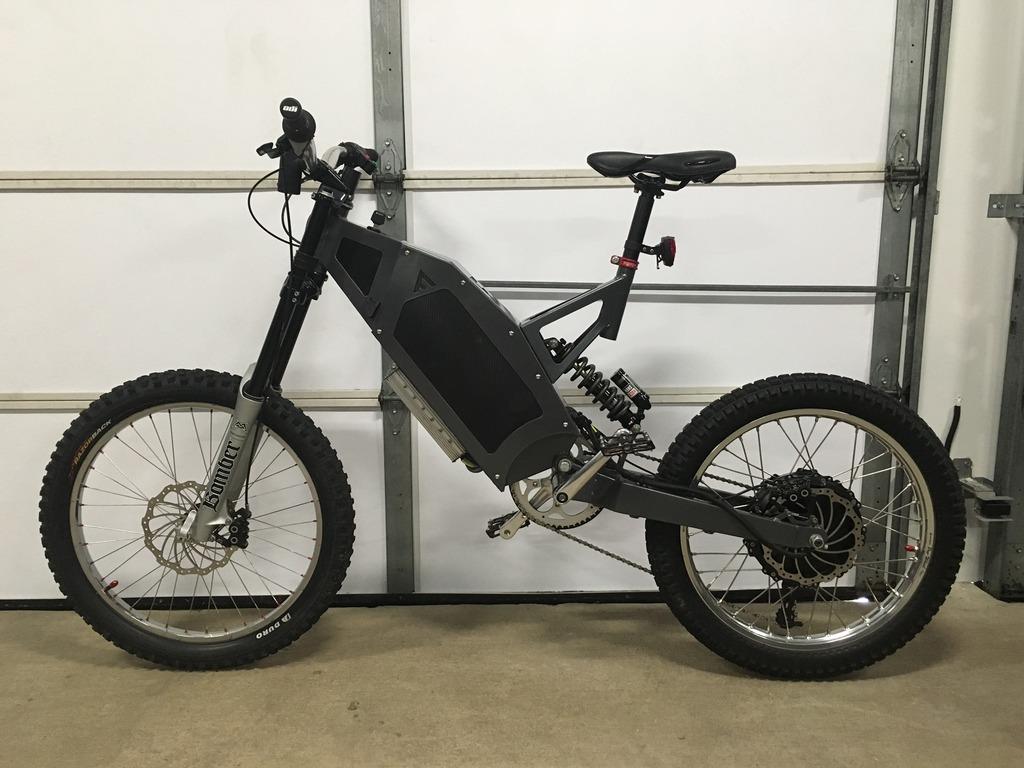 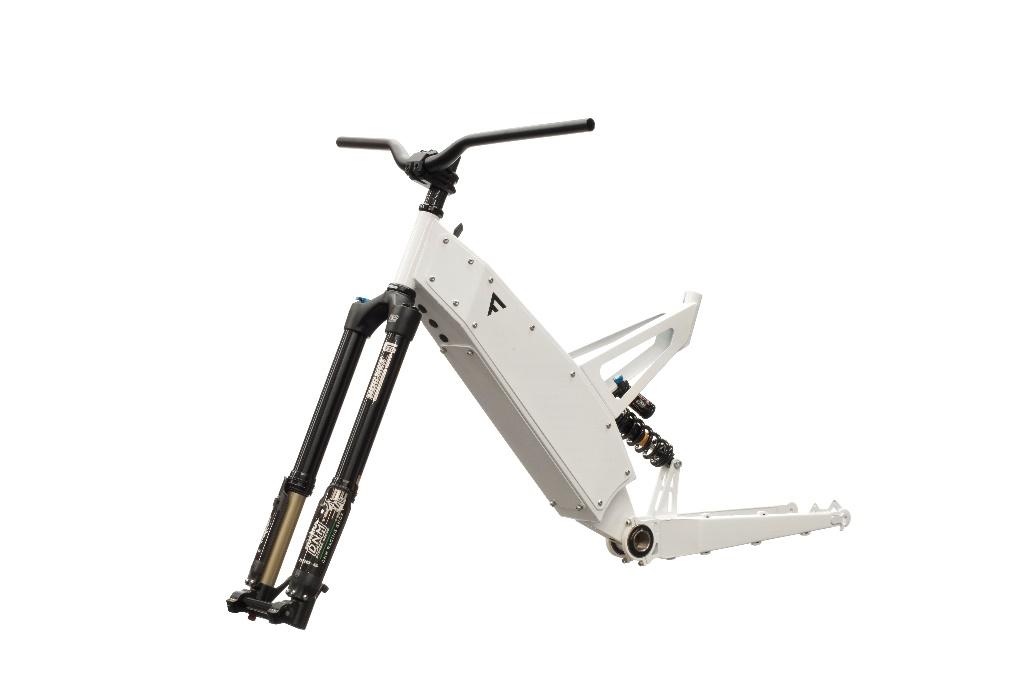 For those who want a more compact, lightweight option, the FUTR Beta fills the void. Again using a monocoque chassis, the Beta is the lightest and most compact ebike chassis of its kind. Capable of fitting a battery with dimensions of 350 X 100 X 115mm and using the latest high capacity 18650 cells, we are seeing builds with up to 1500 Watt-hours onboard giving the bike some serious range capabilities. 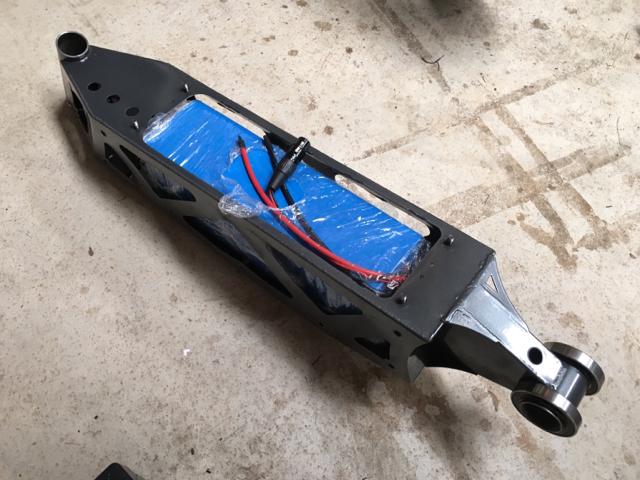 The Beta comes standard with 135mm dropouts and which suits most off the shelf hub motor kits. One of my favorite features of the bike is the super strong concentric BB pivot for the rear swing arm. Suits wheel sizes from 24” to 27.5” with the bigger wheel diameter really giving the Beta a “normal bike” like appearance. Of course, the swing arm comes complete with a solid set of torque plates that will handle up to 4kW without any issues. 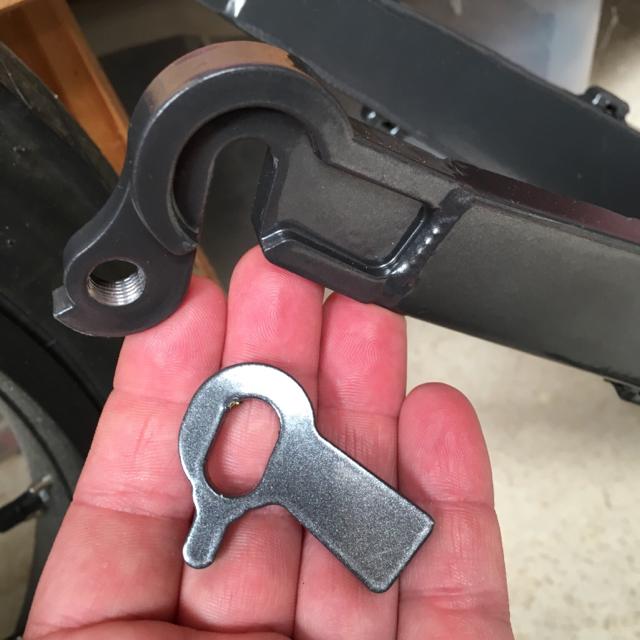 To sit on, both models feel like a natural fit. The Stealth guys spend so much time riding their bikes that they really have the ergonomics figured out for the majority of riders. Being easily able to swap out shocks, wheels and forks means that the bikes are also tunable for most riders who fall outside the bell curve.

Both the Alpha and the Beta have a maximum frame width of 122mm which means that your knees won’t get a beating when you’re out on the trail, or you’re just trying to get some pedal strokes in.

Choosing which one is a hard decision and there are already a lot of people who have decided to buy both.  Not a bad idea, but for my next project I’ll be taking a Beta and adding my own special touches.  How does the first 29er Beta sound for something a little different? 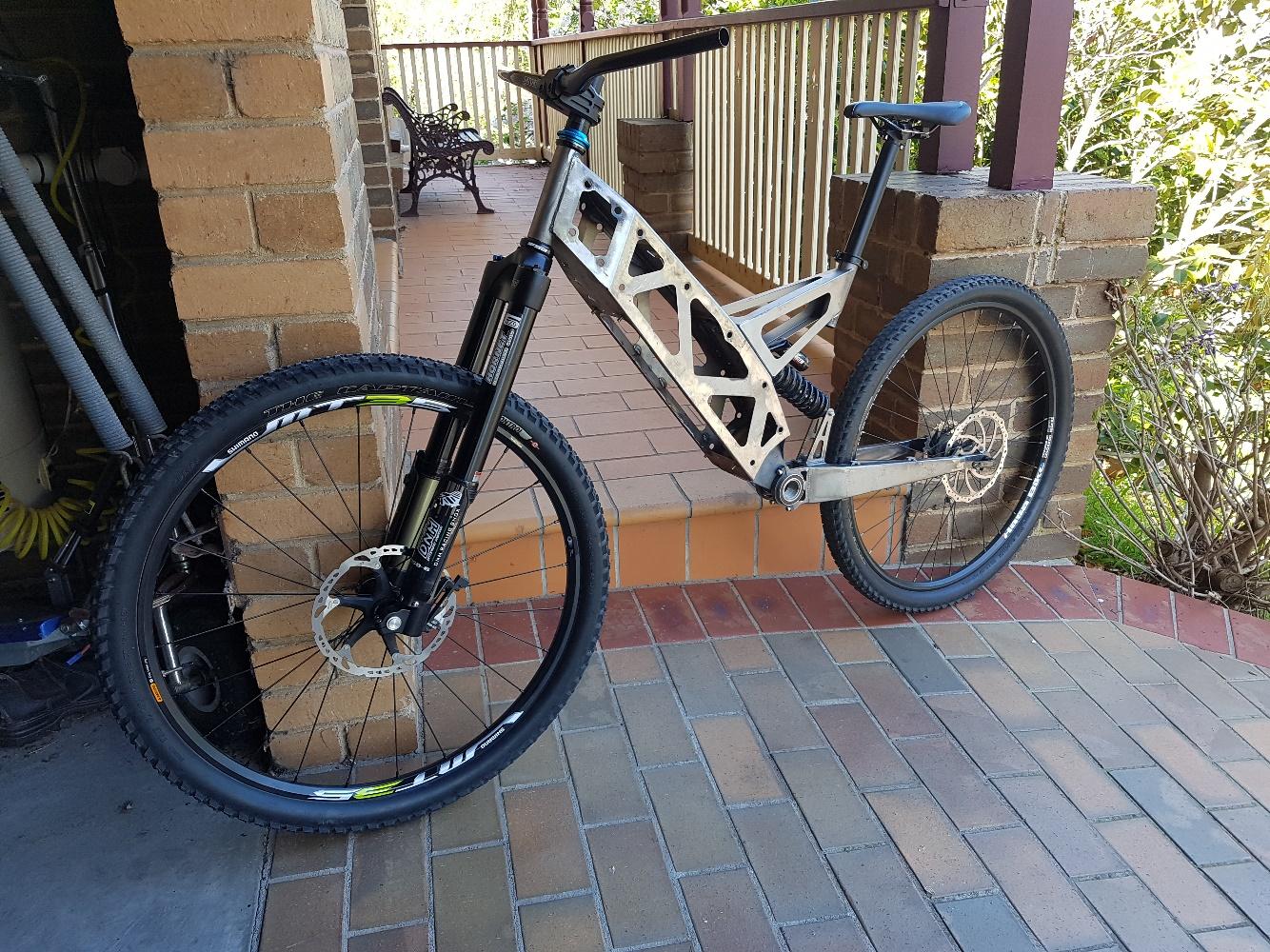 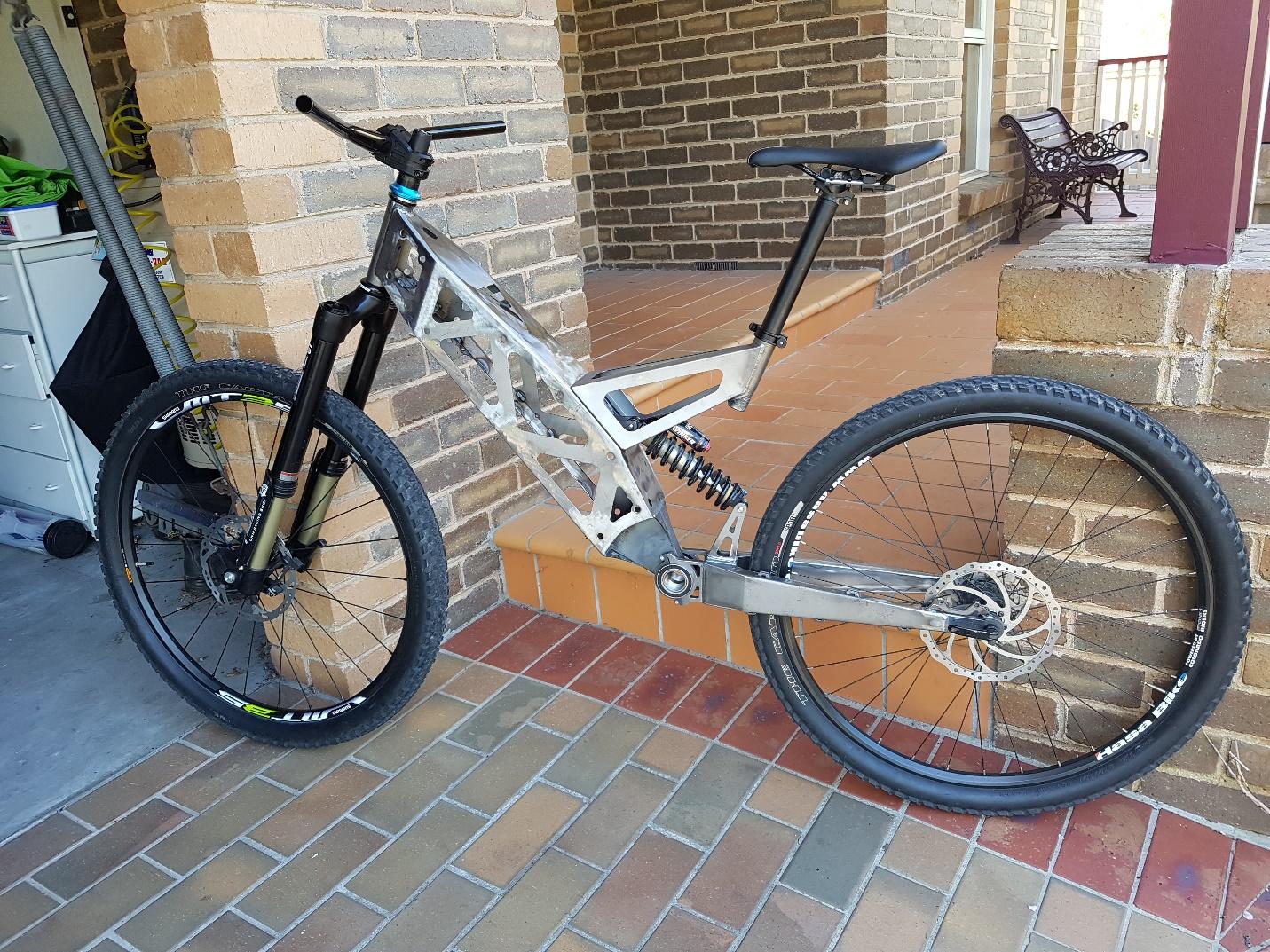 For those who want to see how other projects are coming along, follow this link to the Endless Sphere FUTR thread.

While the Alpha and Beta are selling fast, I’m told that there are plans for a Gamma which may or may not come to fruition in late 2017.  Keep an eye on the FUTR website to stay up to date with their latest releases, or to get started with your own build. http://www.futrelectricbike.com/

Charging an Electric Car with a 4kW Off Grid ...

18 months ago I bought a Chevy Bolt for about 1/2 off sticker price. The Bolt has been awesome with the sole exception that I had no

Here is an article that you will absolutely never

Kevin lives in a very hilly part of Georgia,

Great article! Probably the best explanation of the construction of