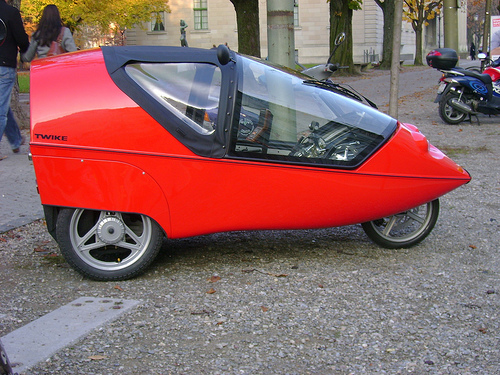 Twike vehicles are human electric hybrid vehicles built for 2 people and their cargo. They are a unique combination of a an electric vehicle and a pedal powered vehicle in one. By using the pedal mode, the driver can lengthen the range of the vehicle and keep control by means of the electric-computerized regenerative braking system.

The vehicles are surprisingly lightweight as they constructed of primarily plastic and aluminum components. These innovative half-ton vehicles can be powered by a 3.3 kw ni-cad battery or a 6kw nickel metal hydride one along with a 3 kilowatt electric motor

which runs the drive train. Twike`s are easily recharged in no longer than 3 hours by plugging into a common 230V household outlet. Their energy drive is further supplemented by the regenerative braking system and the pedal system lightens the power load even more.

TWIKE vehicles have inspired a cult following in Europe and the US and Twike owners who call themselves ‘pilots’ frequently host promotional gatherings. Many of these pilots love the fact that the vehicle is not only non- polluting, but driving one also provides a substantial cardio workout.

Navigating a Twike is somewhat similar to operating the tiller of a boat. They are equipped with a

joystick which makes steering fairly simple and they can reach respectable top speeds of nearly 55 mph. Depending on which type of battery is used, a TWIKE can journey 55-90 miles on a single charge. This range varies based on the weight of the passengers and cargo as well. Battery and power control is managed by an onboard computer which regulates energy use. After market modifications can be made to this system and some users have been able to attain reported top speeds of 65 mph.

Operating costs of a Twike are every low. A full charge of the battery costs only about 45 cents. Depending on the where it is charged, a full charge can cost as little as 3 cents though. A consistent regime of charging the battery every night after use can result in significant cost savings. Battery replacement is the primary significant cost of operating a Twike.