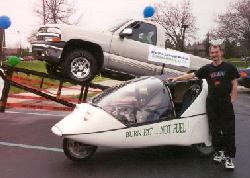 Since the mid 1970s, Walt Breitinger has been riding and promoting a diverse series of unique alternative vehicles designed to reduced pollution, improve health, and entertain family, friends, and thousands of bored and weary commuters (and an occasional police officer) in Northwest Indiana.

Walt’s most ambitious projects included the production of fuel alcohol (ethanol) which he fermented in his basement, distilled on his kitchen stove (officially licensed by the ATF), and used to power his lawn mower and 1976 Volarie Station Wagon, then christened “Hoosier Agri-Power”.  Walt later purchased an abandoned electric Seabring City Car (left over from the days of the Arab Oil embargo), which he completely restored and used in lieu of an internal combustion engine.  After a tragic accident which cracked the City Car literally in half, Walt attempted to commute to his office by conventional bike, fully fared recumbent bikes and trikes, and arm and leg-powered recumbent trike and eventually with bikes assisted by Weed-Eaters and other tiny two-cycle engines.  Occasionally discouraged by Indiana blizzards and the ensuing salt and sand affectionately dumped by the State Highway Department on Walt’s shoulder, he embarked on a world-wide search for the “ultimate sports car” and settled on a fully enclosed, human and electric-powdered trike manufactured in Switzerland and featured as the first link to this site. 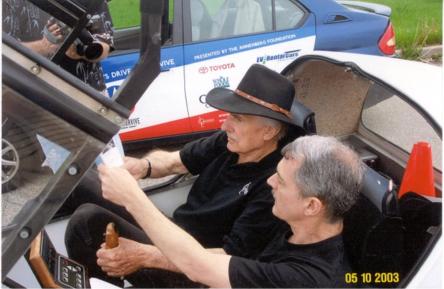 Walt Takes Dennis Weaver for cruise in the Twike

Walt resides in Valparaiso, Indiana with his wife Cindy and his three sons, Benjamin, Alexander, and Maxwell.  He has used his vehicles for his 15 mile daily commute to Merrillville, Indiana, where he enjoys his role as Vice-President of Commodity Investments for A.G. Edwards and Sons.  Walt’s creativity and dedication have inspired many and demonstrated to all that there are, indeed, many alternative forms of transportation from which to choose.

Walt can be contacted at Walt at electricbike.com

Life is a journey – enjoy the ride! 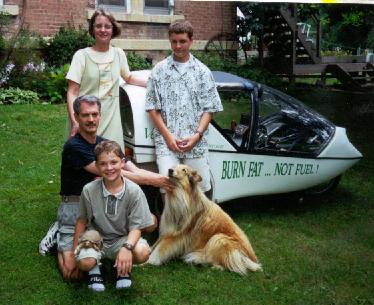