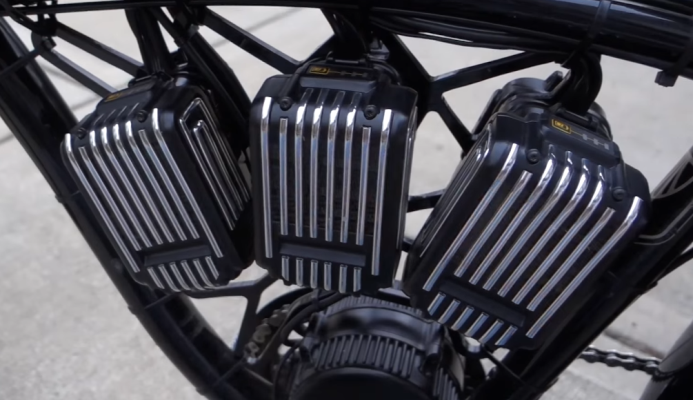 Blair is a guy who works as a mechanic at a foods processing plant, and over the years he has seen cordless tool batteries improve quite a bit. He recently decided to build a custom ebike using DeWalt 20V battery packs, and here is the result. Blair posted Ten videos to document the entire process from start to finish. If you want to see the end result walk-around, go straight to the last video.

Blair was happy with the Trek bike and the 48V Bafang BBS02. The headway cells were “OK” but the BMS that they came with ended up damaging some cells, over the winter when he stored the ebike in his garage for a few months.

Once Blair had made the decision to switch to DeWalt cordless tool packs, he knew he was going to need a charging station right away. DeWalt has chargers that can charge two packs at the same time, but Blair found out that two single chargers cost less than the double-pack charger. So, He purchased six of the single chargers (the DCB107), and clustered them for mounting on his garage wall.

Getting stock battery packs to work

Blair gets six DeWalt DCL040 flashlights in order to cut off the battery interface so he can mount those onto the ebike frame. He is using the 5-Ah packs, so each one is 5S / 2P using 18650-format cells that are high-discharge 2500-mAh each.

Cutting off the flashlight bases, and making them into adapters

Fabricating the aluminum frame-mount to hold the batteries

Mocking up the parts locations

Blair is using a 750W 48V Bafang BBS02, with a 15S battery pack. The stock BBS02 controller has 63V capacitors (with a little safety margin, of course), so this is the absolute highest voltage that the stock controller can run. However, the stock Low Voltage Cutoff  (LVC) will not work with this voltage, so that is the reason it was vital for him to install voltage gauges, in order to keep track of the State Of Charge  (SOC)

One interesting custom touch is that Blair installed heated handlebar grips, and his awesome heated jacket runs off the ebike battery pack (instead of it’s own DeWalt cordless tool battery, as it was originally designed to run on)

Conclusion, and some Editorial opinion

When any group of people sees something like this, half will want something similar, and the other half might wonder…why? A system like this only has 10-Ah of range, and…once you add up the cost of all the parts (not counting all the time to adapt all the parts to work like this), a conventional 10-Ah ebike battery will cost less. There are actually a few reasons that this might be a useful way to go.

The hardest part of ebike systems is the battery. It is also the most expensive. If you make a mistake on your battery system design, your expensive investment can seem like you threw a lot of good money away, if…it dies an early death.

Blairs first Headway cell battery pack died due to a faulty Battery Management System  (which we sometimes call a Battery Murder Suspect). Cordless tools have a very sophisticated, robust, and mature design of BMS in order to reduce warranty returns on their battery packs. Battery dies too early? take it to a DeWalt dealer, and they will prorate the replacement. If you only used half of its rated life, you will get 50% off a replacement pack.

Here is a 1926 BMW R35, and the style of Blair’s cruiser reminds me of this era of motorcycles.

The other reason someone might want something like this is “future-proofing”. If there is a trade war with China, then…ebike battery packs that use Chinese parts will be unavailable for a while. On the other hand, there are tens of thousands of cordless tool packs in warehouses right now. DeWalt, Makita, Bosch, and Milwaukee will never go out of business, and they will never stop making cordless tools.

If you like the idea of cordless tool packs for an ebike, here are some options

Here is my EGO 56V / 14S weed wacker. The 4-Ah battery pack is the green-and-black part next to my hand.

Both brands have a 4-Ah pack available, so two of them would be 8-Ah, and three of them would provide 12-Ah, which is what I would recommend as a minimum (four might make a sweet 16-Ah V-twin?).

[edit: after some additional investigation, I feel the “56V” EGO packs are the best possible cordless tool pack to experiment with ebike systems. They have lawnmower packs that are available with 5.0-Ah and 7.5-Ah]

[edit: never plug in a full battery pack to a harness with a low battery pack. They will try to equalize rapidly, and may get so hot that they catch on fire. Charge and discharge them all at the same time]

What cells are inside the DeWalt 20V packs?

DeWalts light slimline packs (which have only five cells inside) use very high discharge cells (The most likely suspect for this 1.5-Ah cell is the 30A HB6 from LG). However, the 5-Ah packs that Blair is using have ten cells inside, so each cell doesn’t need as much amp-producing capability to work at the power levels that this line of tools demands. Since each pack is 5-Ah and we know they have ten cells inside in a 2P configuration, each cell must be a 2500-mAh cell.

After some research, I am fairly certain this model of DeWalt pack uses the HE2 cell from LG-Chem, in South Korea. The factory rates these as a 20A peak cell, so in a 2P configuration, it should be able to occasionally put out 40A.

Blair has two pack strings (capable of 80A!), which he did in order to have adequate range, but…I had originally wondered if using a single three-pack string to power his ebike would be straining the packs? The BBS02 stock controller maxes out at 25A, so now I am comfortable stating that Blair will not be getting these packs hot, even if using only three of them, instead of the full six packs.

I was so inspired by this article after doing the research to write about it, that I wondered what other cordless tool battery options were viable. In the spring of 2017, I collected and published the best available info on all the other brands and types of cordless tool battery packs in an article, which can be found by clicking here. 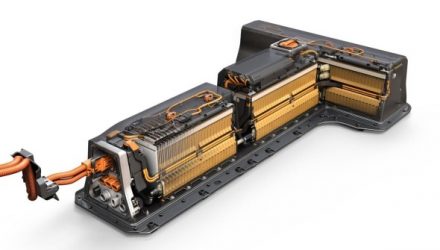 All I want for Christmas is...

I feel incredibly blessed to have the life than