This is an over-the-top custom electric bicycle system from DaVinci Drive Systems on a Motoped frame. I first became aware of the very interesting Motoped company about a couple of years ago. The Motoped has been designed to use a 50cc gasoline engine, and it clearly looks like a light off-road motorcycle. However, it was also designed from the beginning to be as light as possible, and to have pedals for human input. As a result, it uses a lot of heavy-duty bicycle components. 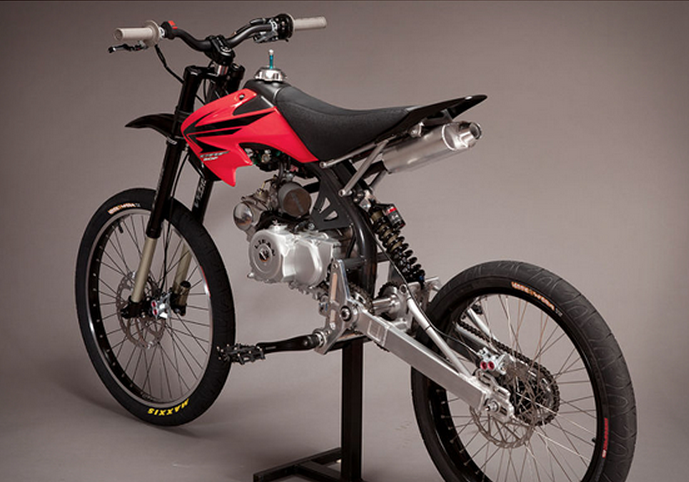 Here is the stock motoped, with a 50cc gasoline engine and heavy-duty bicycle components.

The feature that really grabbed my attention was that they had located a jackshaft in the pivot of the swingarm. This solved several engineering difficulties when melding human and engine input into the same drivetrain…and…this was the first time I had seen a company making something like this for sale (although I had seen a concentric jackshaft/swingarm-pivot on custom builds before)

I immediately saw that this unusual frame would make a great donor for swapping the stock engine for an electric motor. Several builders talked about it, but Matt is the one who stepped up to the plate and put together this wild beast.

Matts E-bike business is a full-service prototyping operation. He not only does his own engineering and design, he does his own CNC machining and TIG-welding, in order to make sure his custom prototype work will always meet his high standards and still be finished in a timely manner, by accomplishing the difficult operations in-house.

Matt specializes in drive reductions based on the US-made Astro Flight motor family, and his website is named “DaVinci Drive Systems“. By having a significant belt-and-chain RPM-reduction between the motors and the output, Matt’s drives are able to provide an awesome amount of torque from very small and light motors. Since these motors can spin at unusually high RPM’s, they generate a tremendous amount of power from only 50V.

The Castle Creations controllers for these advanced motors are so small and light, one of them would fit in your hand. 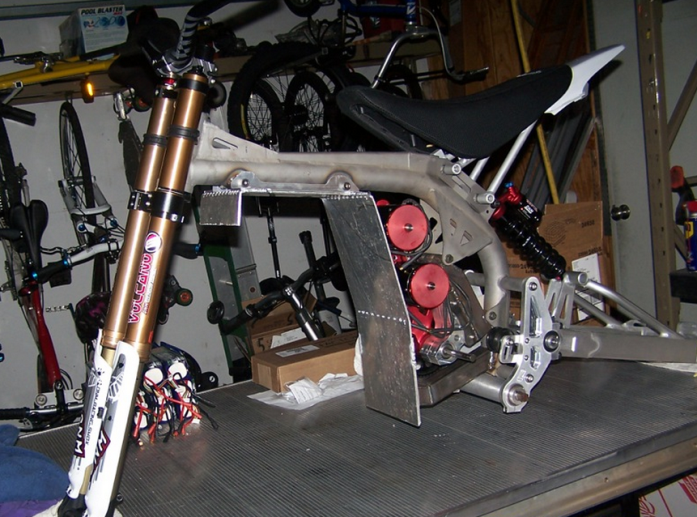 The stock 50cc engine has been removed, and the custom fitting of one of Matts dual-Astro  drives has begun. The massive battery box is starting to take shape.

“…This is the drive system that Outrider USA used on their 86-MPH run (a recumbent trike). It was on loan to them. Now that I have it back, it is going to be pressed into service on this bike. It will be geared for 40-MPH. That should make this thing wickedly powerful with that final gearing…” 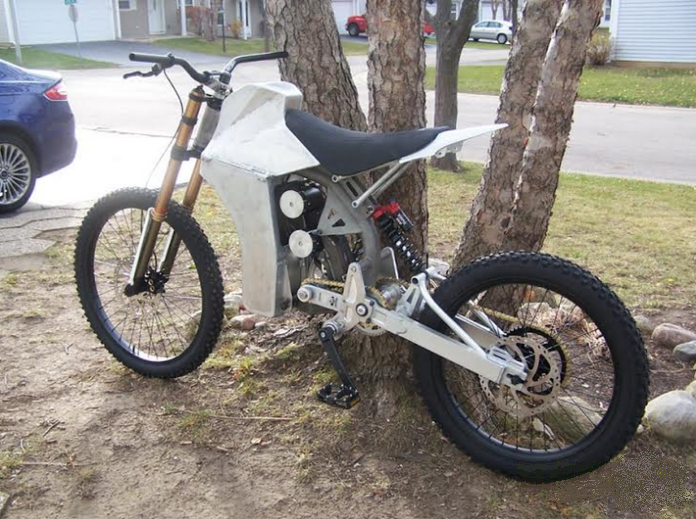 “… I love all the room I have to mount components…did some plasma cutting and TIG welding today. The box is 1/8 inch thick (3mm) 6061 aluminum…I am running the stock 26-inch front wheel, and 24-inch rear that the Motoped comes with…The Motoped wheelbase is 52 inches…” 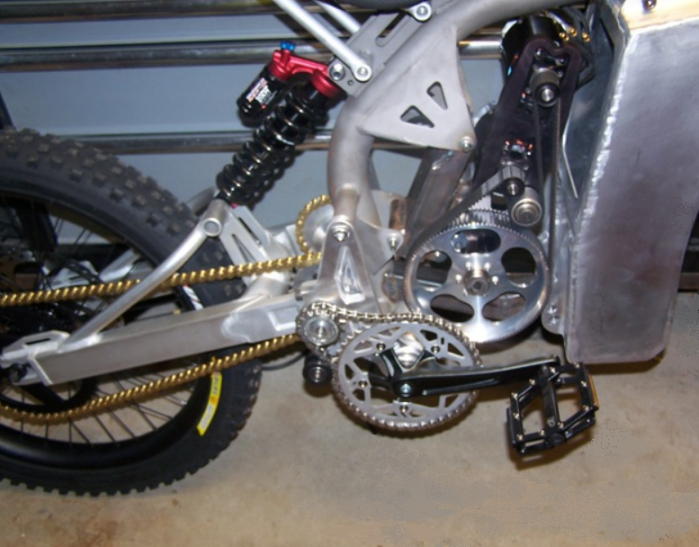 A close-up of the right side of the drive system.

In the pic above, you can see the pedal input chain to the jackshaft, and also the belted primary-reduction of the dual-motor drive. The chainring is a common 130-BCD unit that can be easily changed by the owner due to wear, or if a different tooth-count was desired. 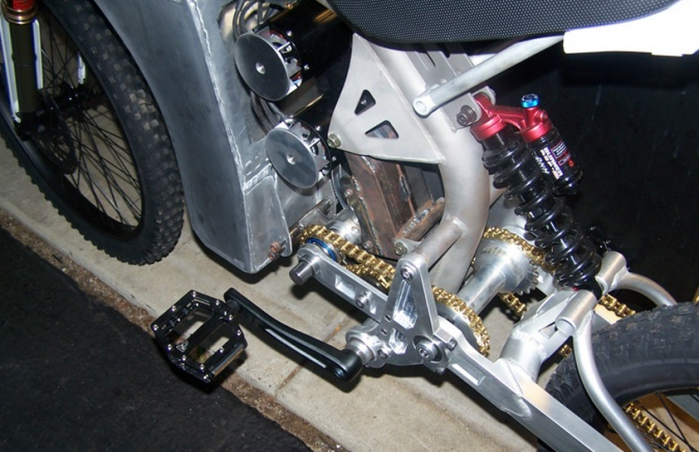 The left side of the system, showing the dual-motor final drive to the jackshaft.

“…the battery enclosure will be a semi-stressed member. There will be an aluminum subframe shaped a little bit like the tank that will house various electronics. If I have room I will mount the 1,200 watt Meanwell charger on-board. It will use a Garmin automotive GPS and hopefully will have Delta/Wye switching…” 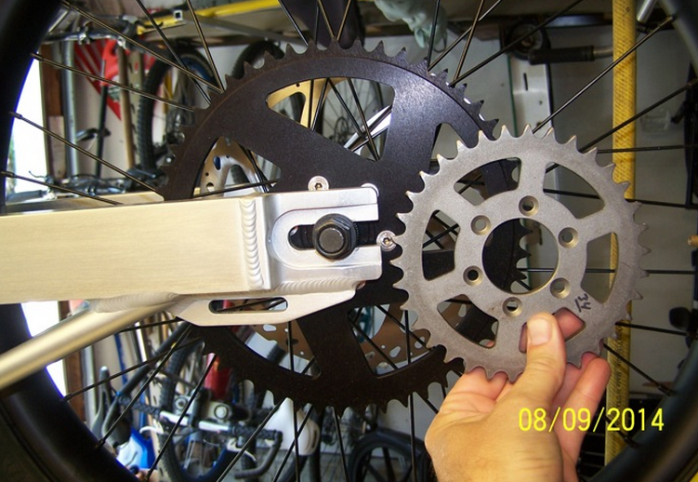 The stock 34T  sprocket was replaced by a custom 52T unit.

The stock Motoped final drive ratio has a top speed that is higher than Matt wanted, so…to fit his desire for a lot of off-road hill-climbing, he swapped-out the stock 34-tooth rear sprocket for a custom-ordered 52T unit from Rebel Gears. Both are drilled to mount to the ISO 6-hole interface for a bicycles’ brake disc. The rear wheel has a heavy-duty dual-disc hub. 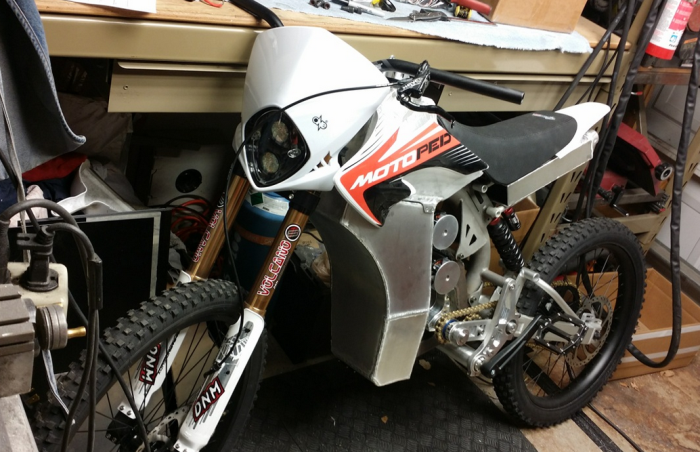 A few more finishing touches before everything is dis-assembled to send out parts for powder-coating.

In the pic above, the build is almost complete, and you can see the aluminum box under the seat, which houses the on-board 1,200W charger. The heaviest component of the bike is the battery, and it is located here in the best possible place, forward and as low as possible. This helps hold down wheelies, and also provides an excellent balance. 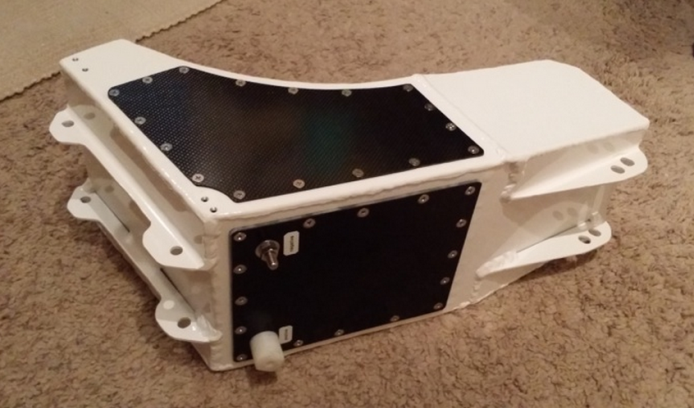 This battery box is a semi-stressed member of the frame, and holds a huge battery.

This battery box holds a massive 3-kilo-watt-hours of LiPo (3,000-WH), configured as 50V / 72-Ah. Most custom builders have to compromise on how many volts they can carry, or how many Amp-hours (Ah) or range they can carry. This “no-compromise” build has both, 25-kW peaks of power, and enough volume for a full hour of hard riding.

“…This box is actually big enough to hold nearly 100-Ah of LiPo…the side panels are carbon-fiber, but the top cover near the terminals is G10 fiberglass, because CF is conductive… I will be coating the exposed portions of each terminal with Plasti-Dip…” 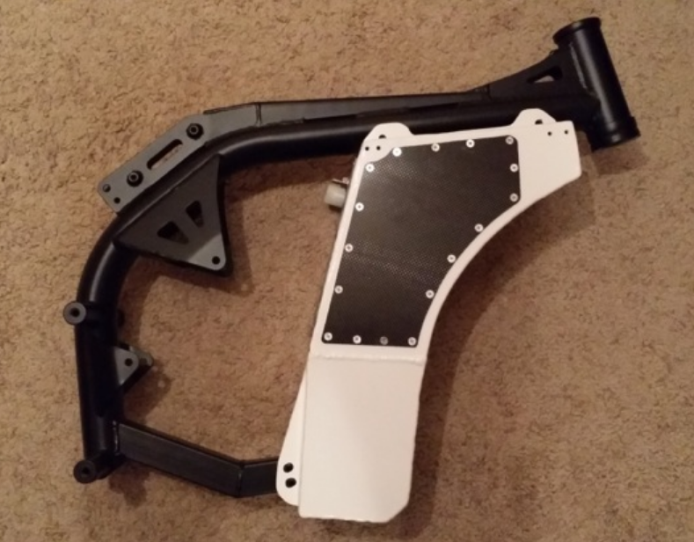 The frame and battery box have both been powder-coated, which provides a much tougher finish. compared to regular paint. 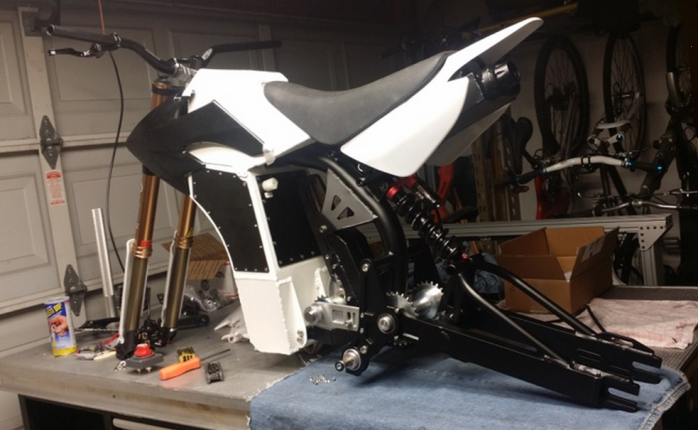 In the pic above, you can clearly see the jackshaft and sprockets that are concentric (having the same centers) with the swingarm pivot. 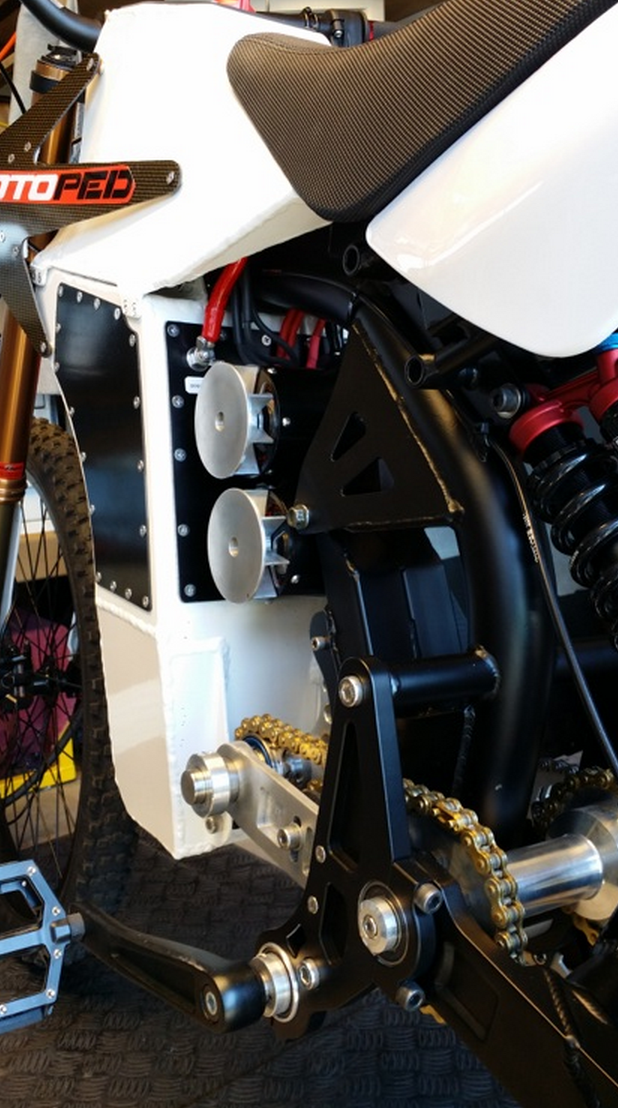 The left side of the drive system.

On the left side, you can see the final chain-drive to the jackshaft. The motor reduction uses the very strong White Industries ENO freewheel, mounted on the front half shown here. The motors are Astro Flight 3220’s with Matts CNC’d centrifugal fans, which dramatically reduce the motor temps by increasing the airflow across the stators. 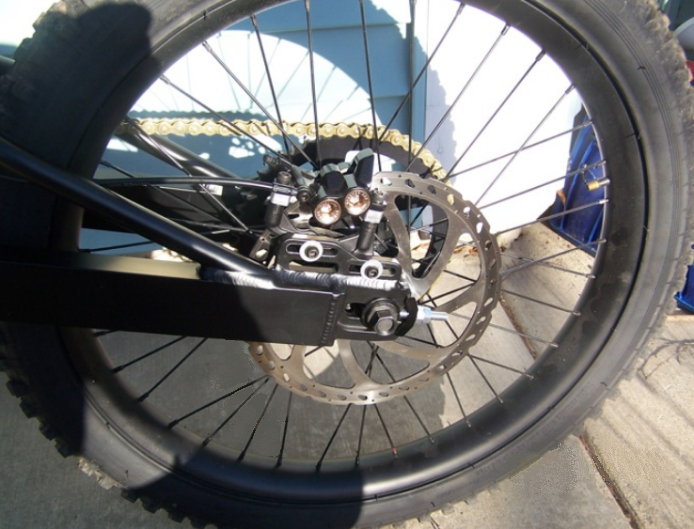 “…I have been doing some off road riding, and the bike rides phenomenally well. I did a bit of suspension adjustment fiddling and I have it riding like the last [gasoline] 125 I owned…This bike has the peak power of a 125, the torque of a 450 four stroke, at the weight of a 80cc minibike. It is really a joy to ride…”