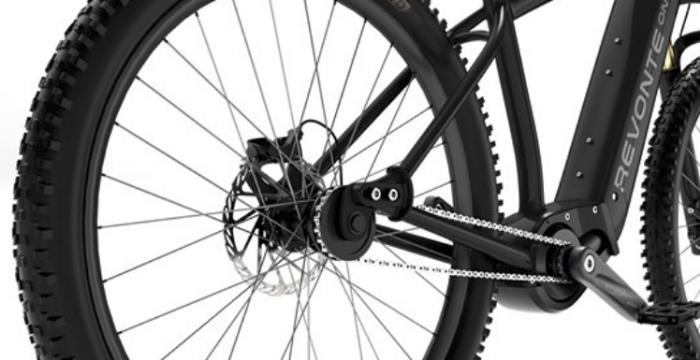 This 250W mid -drive is advertising itself as having an innovative and patented “Constantly Variable Transmission/CVT”. Let’s take a look at what little information is available…

Normally, I would not be interested in a new 250W drive unit, but…this one advertised itself as having an innovative CVT transmission. By restricting the amount of input power that is allowed on “street-legal” ebikes for most European ebikes, some very smart engineers have spent a considerable amount of time and effort trying to figure out how to get the best possible wheel-torque from the modest allowable inputs…

Lavelle ebikes in the UK was impressed by the Revonte system, and they have contracted to use this clever mid-drive.

Although Switzerland and Austria allow a spectacular 500W in a street legal ebike (Dankeshoen!), the majority of European ebikers must struggle along with a modest 250W of input. I don’t know whether I should be disappointed or angry, but…I have taken dumps that used more than 250W of energy…(I already use 1500W every time I ride, and I plan to upgrade to 2500W because I am a degenerate power-hungry addict)

I do not approve of ebikers who drive recklessly at high-speeds and endanger pedestrians, but…if you want to replace a car with an ebike, and you are carrying a child along with two bags of groceries…how much power should you be allowed to have when you tackle a steep uphill on your ebike? (if you ride safely, the correct answer is 2500W…or more)

If this was just another weak 250W Euro ebike, I wouldn’t waste my time writing about it. However, their claim of using a CVT is intriguing. I have emailed the company, and they claim the system is so unique, it was patentable. I haven’t found the patent yet, but I will keep looking…

What can we reasonably speculate about the Revonte CVT, from the small amount of information they have reluctantly revealed? They state that the heart of the CVT is a planetary gear-set. This is very believable, since planetaries are a compact and robust way to allow an electric motor to spin many times faster than the mid-drive output.

Most electric motor designs have efficiency curves that work well around 3,000-RPMs, but the rear wheel of a 26-inch ebike is traveling at 26-MPH when it is spinning at only 336-RPMs. That would require roughly a 9:1 reduction in RPM’s between the motor and the wheel. A planetary gearset is a robust, compact, and affordable way to accomplish this.

The Revonte system only allows a 250W input. In spite of that, they produce a respectable and impressive 90-Nm of output torque.

So…how do they accomplish having a “Constantly Variable Transmission”? I am a fan of mechanical devices, and I have seen crane transmissions that used two motors coupled by a planetary gear-set. One motor provided the best possible torque at the slower speeds, and the second motor provided a much higher speed when the crane needed to raise or lower the hook rapidly when it was un-loaded.

Revonte answered my emails but said they are not ready to reveal the details just yet. It is almost certain that the main motor drives the sun gear of the planetary gear-set (see the graphic above), so what does the secondary motor do? I believe it drives either the edge of the ring gear, or it drives they edge of the carrier plate that anchors the axles of the three planet-gears…either option would provide a variable output as it pertains to torque and speed.

Sooner or later, somebody will tear one apart and post pics on the web, and…with their permission, I will re-post them here. (along with a link to any patents)

I wish Revonte the best of luck. Providing 90-nM from only 250W is impressive, plus the variable transmission claim is intriguing. I want to know how they accomplished this, and I will post any discoveries here…

There are so many ebikes out there on the