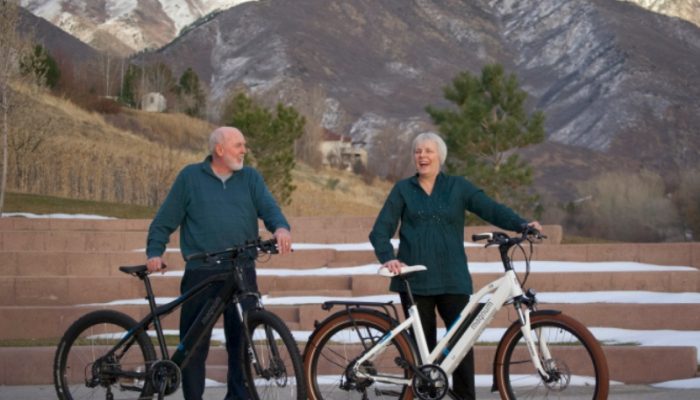 As of August 29, 2019…the US Secretary of the Interior will allow pedal-assist ebikes in all US national parks, and according to order number 3376…”Sec. 7, This Order is effective immediately“

This may not sound like a big deal to some people, but when my wife and I visited some of the national parks here in the US, it was a fantastic experience, and a great value for what you get.

The current Secretary of the Interior is David Bernhardt, and I just want to take a moment to say…Thank you Mr Bernhardt!

One of the core groups of regular visitors are retirees (I am 60), many of whom bring an RV to stay in, rather than use a hotel or a camping tent. Once the RV is parked in your assigned space, what do you do to get around to a store, or a breakfast cafe? There is no better option that a quiet electric bike with fat tires that can go anywhere.

I’ve often seen visitors riding bicycles, which are encouraged in order to reduce overcrowding at the car-parking lots, to reduce car exhaust, and also because bicycles are quiet. Well, as everyone here knows, if you are sight-seeing in a mountainous park, the biggest upgrade to riding a bicycle at our national parks is to use an electric kit added to a bike that fits you well.

For a good all-around ebike to use in our national park system, I’d recommend a small and light mid-drive and a large battery. I wouldn’t recommend skinny tires, and I’d use a 2-inch tire as the minimum. In fact, my favorite ebike uses 3-inch tires to smooth-out the occasional bumps.

There are a few full-sized folding bicycles that can have an ebike kit added to them, and there is nothing wrong with that. However, the most popular folders have the BMX-sized 20-inch wheels. For a full-sized ebike, I would most recommend a mid-srive, like my favorite, the 1500W BBSHD (or it’s smaller brother, the 1000W BBS02). However, for a smaller wheel (like 20-inch), both mid drives and hub-motors work well.

Here is a list of the 10 most popular federal national parks (click here for more info on the top-ten from “National Geographic”).

Great Smoky Mountains Park, 11 million visitors in 2018. It is located across Tennessee and North Carolina. It has over 800 miles of hiking trails.

Yellowstone. This was the first national park, created by 18th President Ulysses S. Grant, to preserve it’s incredible natural beauty. Last year over 4.1 million visitors enjoyed this national treasure. It covers over 2.2 million acres, and it spans the borders of Idaho, Wyoming, and Montana.

Yosemite is located in central California, and I have personally visited this stunning national park. I’m told the best time to visit is in the spring (when the snow-melt creates many picturesque waterfalls), but get there before the summer school break, when it can become very crowded. President Lincoln passed laws protecting this region in 1864, and then in 1906, John Muir persuaded president “Teddy” Roosevelt to make Yosemite a national park.

Acadia National Park is alongside the sea in Maine. I automatically assume it will be at it’s most beautiful in the fall, when the trees are changing colors…

Grand Teton National Park is in Wyoming, and it lured 3.5 million visitors last year. This park is at a high elevation, so it would be snowed under in the winter, but should remain relatively cool in the summer months…

Olympic National Park in the great northwest of Washington is known for its rugged Pacific shoreline, and the lush forest that is found inland.

Glacier National Park is in Wyoming (that makes three of the top ten visited parks being located in Wyoming!). It has winding mountain roads with spectacular views.

What does the new law actually say?

Here is a link to the three-page order (click here).

…That Act defines a “low-speed electric bicycle” to include a “two- or three-wheeled vehicle with fully operable pedals and an electric motor of less than 750 watts (1 h.p,), whose maximum speed on a paved level surface, when powered solely by such a motor while ridden by an operator who weighs 170 pounds, is less than 20 mph…”

The phrase “powered solely by such a motor” sounds to me like hand-throttles are allowed, instead of a European-style law where only “Pedal Assist Sensor” PAS is allowed. This is great news. I would have been happy even if it was “PAS only”, where you have to pedal to get power. On my personal rides, I prefer to start out with a hand throttle, and then begin pedaling with the PAS system after I am rolling. If you are starting out from a dead stop on a steep uphill, needing to use the PAS can be awkward for the first couple of seconds, especially if you are around traffic.

There are over 60 US National parks, and even if you don’t live near one of the “top ten” listed above, every single one of them is exceptional enough that it cried out to become a nationally protected park. Here is a list of US national parks (click here), and I highly recommend that you make a plan to visit one close to you as soon as possible.